All photos by Amy Hadden Marsh

These geldings were rounded up and removed from their home range and shipped to Utah’s Axtell short-term holding facility in July of this year.  After four months at Axtell, they were transported to an in-person, public adoption event in Grand Junction, Colorado on November 4th and 5th. At the time of the controversial roundup, Colorado’s Cañon City holding facility was under quarantine after a “respiratory disease complex, including Equine Influenza,” killed 146 West Douglas horses last spring. (Steve Leonard, Colorado Wild Horse Facility manager, told AWHC that, as of October 1, Cañon City is no longer under quarantine.) The Wheatland, Wyoming off-range corral was also closed in March 2022 due to a strangles (Streptococcus equi) outbreak and remains closed. The BLM has canceled several adoption events at the Wheatland facility, including one scheduled for October, 2022.

BLM chose not to reduce or halt roundups during the quarantine period. Instead, the agency remained on schedule to remove more than 20,000 horses and burros in Fiscal Year 2022, funneling these animals into an overburdened and dangerous holding system. In fact, the agency accelerated the timeline for the roundup of the Piceance-East Douglas horses, despite outcry from Colorado governor Jared Polis, Congressman Joe Neguse, ecologist and Sierra Club Wildlife Chair Delia Malone, and the public. With Wheatland and Cañon City out of commission, the Piceance-East Douglas horses went to Axtell.

The animal welfare assessments at all three Utah facilities found that not all animals were tested for equine infectious anemia (EIA) within a 30-day period, which the BLM mandates. Introducing new horses that have not been tested for this disease can increase the risk of infection or outbreak.

The BLM called this “unrealistic” due to the number of animals that come into holding facilities at one time.

Records also showed that not all animals had received 6-month vaccine boosters nor had some Axtell horses received annual boosters in 18 months - a full year and a half after arrival. At two of the facilities (not including Axtell), sick and healthy horses were held in the same pens. The BLM’s response? They didn’t know they couldn’t do that. And, this was happening after Wheatland and Cañon City were already in quarantine.

In other words, in Utah at least, BLM claims there were too many horses coming in at once from roundups to innoculate them against EIA, and that they didn’t know enough to keep sick and healthy horses apart.

At the November Grand Junction event, only 34 out of the scheduled 70 Piceance-East Douglas horses were up for adoption - all geldings. The mares remained at Axtell due to “snotty noses,” said Steve Leonard. He told AWHC that the contract vet at Axtell had not made any diagnosis but cleared the geldings for travel to Colorado. Snotty noses are often a symptom of strangles - the disease that continues to plague the Wheatland corrals.

What Leonard neglected to say was that some of the geldings at the Grand Junction adoption event also had snotty noses, as verified by photos from the event and post-event observations by some of the adopters. One adopter told AWHC that her horse coughs occasionally. Another adopter contacted her veterinarian, who diagnosed the adopted horse with a “respiratory illness”. AWHC remains in contact with the adopters whose horses exhibited symptoms. 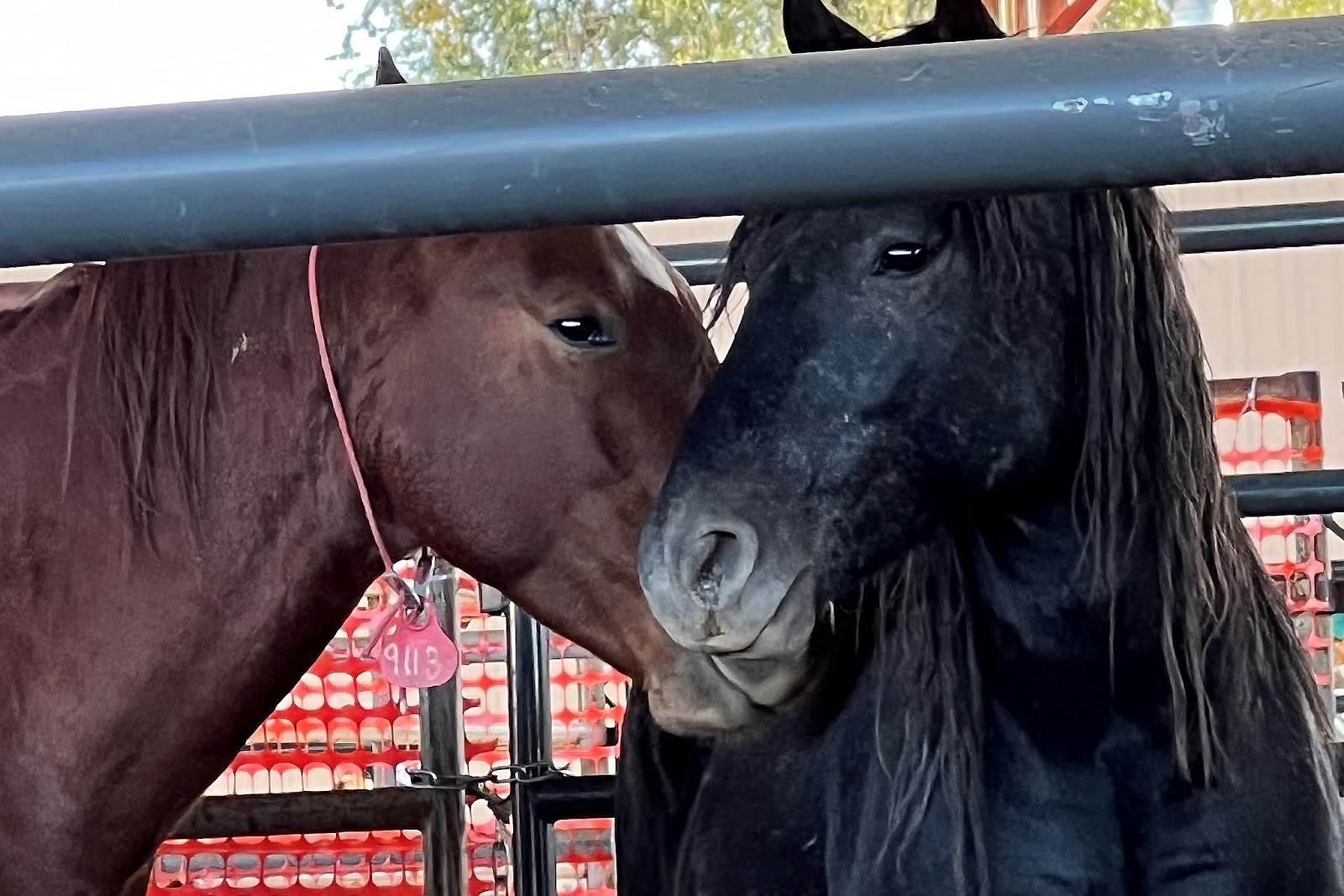 The event in Grand Junction was orderly and stretched over two sunny, cold days. The horses were in pens under shelter at the Mesa County Fairgrounds. Leonard said the agency had “lucked out” at the last minute and had been offered the Fairgrounds as a staging area, so the agency moved the event from an unsheltered, outdoor setting in nearby Fruita.

The entrance was on the west side, where all were funneled into the event. To the left, was a round pen for training presentations. Local advocacy groups, including Piceance Mustangs and the Meeker Mustang Makeover, had booths along the south side. Piceance Mustangs offered adopters a resource guide to help with the challenges of adopting a wild horse. There could have been a hundred people at the event at any given time but the size of the venue gave everyone plenty of space. The crowd seemed happy and excited to see the horses. 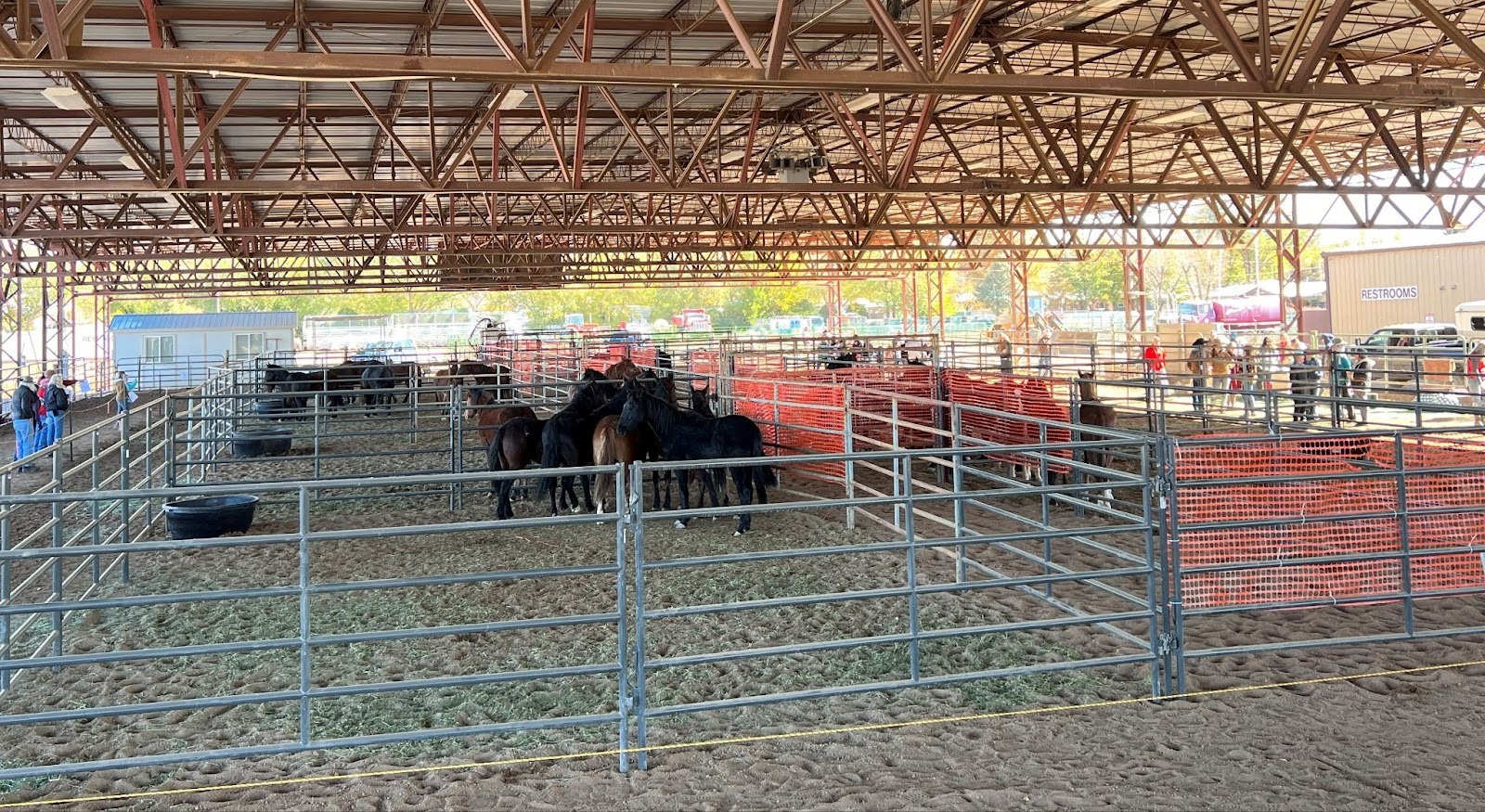 Each pen held 3 - 7 horses, all under five years old. Some were yearlings. Leonard said that none of the horses were sale authority animals, meaning all were younger than ten years.

The animals appeared clean; no muddy, dreadlocked coats or wet feet. Some bunched together and moved around their pen as one, 24-legged animal. Others appeared more relaxed, eating clean, dry hay spread on the sandy floor of the pens. A large rubber bucket in each pen held clean water.

The pens were clustered in the middle of the venue. One pen, #7, was empty. Leonard said it was a kind of buffer pen and could be used to quiet or separate horses if necessary. It remained empty throughout the event. The pens were surrounded on three sides by a roped-off alleyway about ten feet wide to separate horses from the public. The east side was an empty space near the loading area where the public was not allowed. 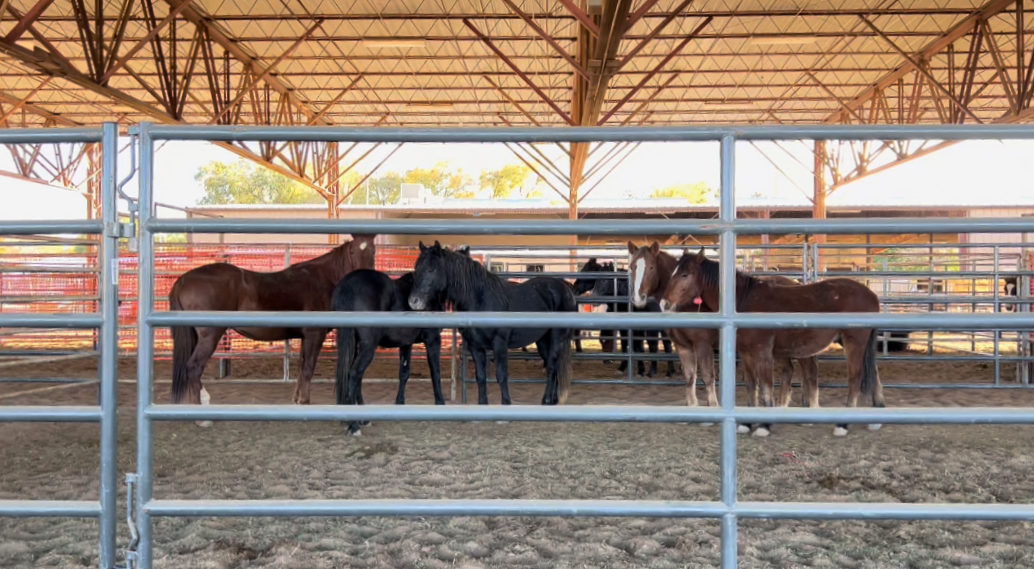 The Mesa County Sheriff’s office was in charge of security overnight Thursday. Friday was for public viewing and training demos from noon until 6 PM. BLM law enforcement officers patrolled the venue Friday night. Public viewing resumed Saturday at 7:30 AM. A silent auction ran from 10 to a little past 10:30 AM. Training demos continued into the afternoon.

Loading began immediately following the auction. It seemed orderly and mostly quiet except when a horse would bang around inside a trailer. No injuries were reported. BLM staff appeared knowledgeable and capable and were friendly and willing to answer questions. The large, narrow, uncomfortable-looking box in the photo below is where horses got their tags removed and settled for a few seconds before launching into a trailer. 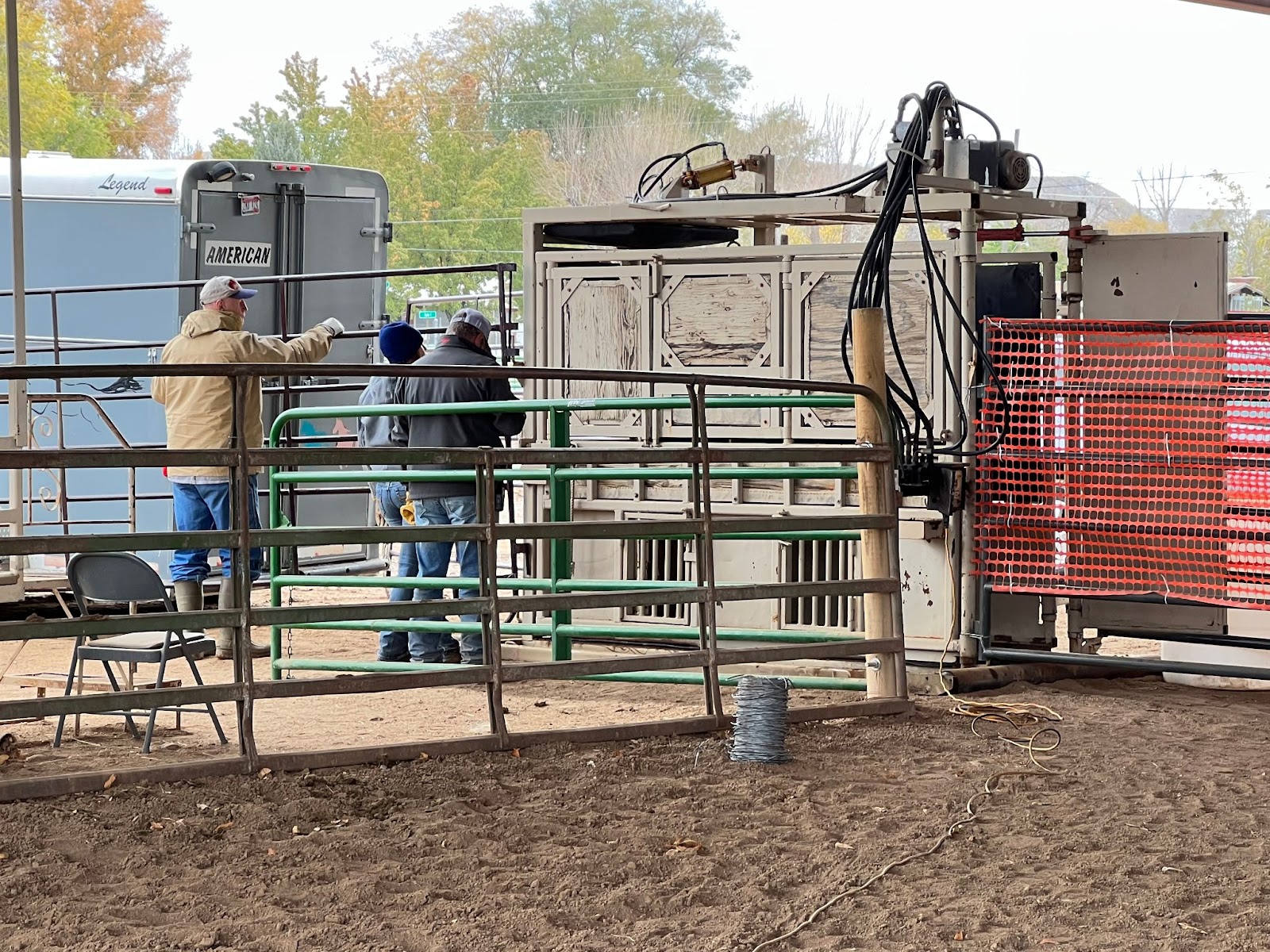 ​The BLM hails this event as a success, and in some small way it was: all 34 horses were adopted. But, had TIP trainers and rescue groups not stepped up to take horses that no one else wanted, the outcome would look very different.

Is the BLM adoption program a viable solution?

The BLM has a capacity crisis on its hands. The agency brutally rounds up record numbers of wild animals and stockpiles them in a holding system replete with animal welfare violations and disease outbreaks.The Grand Junction event provided a happy ending to 34 (4%) of 867 horses permanently removed from the Piceance-East Douglas HMA in July. But, 833 Piceance horses remain in short-term holding, currently costing taxpayers $5 per horse per day. In 2021, overall off-range holding for wild horses and burros cost $77.7 million. BLM perpetuates a failed system by continuing to attempt to adopt its way out of this ever-growing disaster with small-scale adoption events where minuscule numbers of animals find placement.

In an effort to strengthen weak adoption numbers, the BLM launched the Adoption Incentive Program (AIP) in 2019, which offers adopters a $1,000 cash incentive per horse for up to four horses or burros. But, the program is rife with controversy. An AWHC investigation showed that over 1,000 BLM-branded horses and burros have been found at kill pens or slaughter auctions across the country, headed for foreign abattoirs.

AWHC advocates for the elimination of the cash incentive and calls on the BLM to offer a veterinary voucher instead to offset the cost of the first year of care. Further, AWHC encourages the BLM to promote responsible adoptions and humane wild horse management.  The agency continues to spend millions of taxpayer dollars every year to remove wild horses and burros from the range permanently. And, most of them are warehoused, at a steep price to U.S. taxpayers. After adoptions, sales, and transfers, more than 11,000 have entered an already overburdened holding system so far in 2022.

While offering wild horses and burros for adoption is the agency’s flagship, “white hat” program, paying the public to adopt an animal has become a mechanism for hundreds, perhaps thousands, of wild horses and burros to be funneled into a slaughter pipeline. Small adoption events around the country provide hope for the few animals that find good homes but data show that current BLM management practices bolster an unsustainable system.